Can Suzlon Soar Higher With The Winds?

India’s wind energy market is the 4th largest in the world and Suzlon Energy (NSE:SUZLON) has the No.1 position in this market. It is also ranked amongst the top five manufacturers of wind turbines worldwide. Suzlon was started by a Gujarati entrepreneur Tulsi Tanti in 1995. The company suffered badly during the global financial crisis as competition in the wind turbine industry increased with the rise of Chinese players. Suzlon along with leading players like Gamesa and Vestas suffered heavily. But better technology, brand and scale has allowed all these companies to recover from that severe downturn. In tune with changing times, Suzlon has changed from a pure play wind turbine supplier to a  completely renewable energy firm with presence across development, construction and manufacturing.

Below we look at the prospects of investing in Suzlon’s stock and the threats to wind market in India.

Why Should you Buy Suzlon?

Suzlon has a presence in 19 countries across 6 continents in Asia, Australia, Europe, Africa, North and South America. The company has a cumulative wind energy installation capacity of ~15.5 GW and over 21 years of experience. It manufactures S97 and S111 turbine generators suitable for a wide range of locations. Suzlon has phased out its older WTG models viz. S88, S82, S66, and S52 but continues to support and maintain the ones that are installed already. The company sold its subsidiaries – Senvion (formerly RePower) and Hansen Transmission in the last two years to get reduce its huge debt burden.

Suzlon Energy has made a great comeback from morass it found itself after the Great Financial Crisis. Like other major Indian companies (Hindalco, Tata Steel and Tata Motors) with global ambitions, Suzlon also went into an acquisitions overdrive and took a lot of debt to buy foreign companies at the peak of the global economic cycle. The company was saddled with high debt load of $2.5 billion and there were serious bankruptcy fears at one point of time. Suzlon started to recover again in 2014 with 20% share of the Indian wind turbine market as the industry revived with some of the green energy incentives being restarted.

Suzlon has seen a good bit of operational improvement after reducing debt, through the sale of assets such as wind farms, its German subsidiary Senvion and other expensive European acquisitions.

iii) Solid financial backing from one of the Richest Indians

Dilip Sanghvi of Sunpharma, India’s largest pharma company by value pumped in a substantial sum for a 23% stake in Suzlon. Suzlon’s massive debt burden had pushed the company to the brink of bankruptcy before a huge fund infusion from Sunpharma owner got it back into the reckoning. With debt being largely reduced and a big pocketed promoter on board, Suzlon might be a potential multi-bagger in the making.

Major wind developers in the country have diversified into solar since the entry barriers in the solar industry are lower than wind energy and growth is higher. Suzlon has utilized its wind farms to put up solar panels, given that land is a major constraint for the growth of solar energy. It had won around 10% of the capacity, bid out by the southern state of Telangana in 2016. The company has expertise in EPC and power markets and good relationships with regulators and power utilities. This provides it the much-needed edge in the development of large solar power plants which require similar capabilities. Suzlon, instead of doing plain vanilla construction bids, develops solar farms and then sells the equity to other large solar developers for a hefty margin.

Suzlon reported revenues of INR 7,700 crores which was an increase of 24% y/y. Suzlon has returned to the black with profit after taxes (before exceptional items) of INR 296 crores as compared to INR -314 crores in the same time last year. The closing order book stood at an impressive 1,231 MW. The company has also considerably reduced its debt burden over the years to INR 6,500 crores presently. Suzlon also announced its 2.1MW wind turbine achieved 42% plant load factor in its first year of operation at the Jamanwada site in Gujarat.

In an interview with Business Standard, Tulsi Tanti, chairman and managing director, Suzlon, said, “India will be a large hub for wind manufacturing in five years on the strength of its domestic demand.” 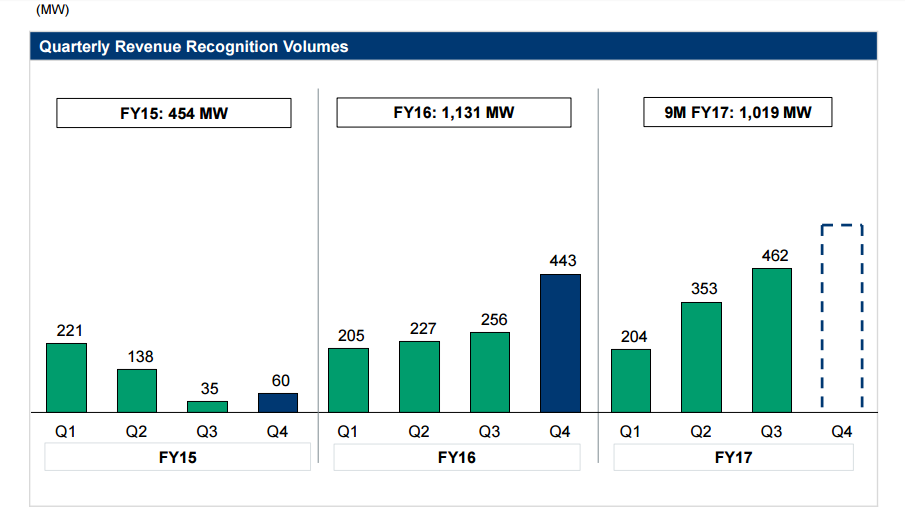 a) Solar is a threat

The threat of solar power is a dampener because solar energy prices are falling steeply and have already gone below wind power in a number of cases. This makes it harder for wind energy in India to grow at its annual capacity addition rates. Utilities are refusing to sign expensive PPAs with wind power developers since solar energy projects have become much cheaper. Most of the large wind developers in the country such as Mytrah, Renew Power, Hero and others have already become large solar developers after winning huge capacities in recent state and national solar reverse auction tenders.

Though it looks like the prospects of the wind industry are improving in India with the government setting a target of 60 GW of wind power by 2022, the industry is plagued with larger concerns. Biggest headwind in the form of a removal of major subsidies such as the accelerated depreciation and GBI, remain for the industry. The Indian wind industry witnessed its first reverse auction tender for wind capacity as against feed-in tariff (FIT) schemes in place earlier. This is another headache for Suzlon as it might have to sell products at much lower prices and margins in order to compete with other players such as Inox Wind.

Suzlon stock trades at around the INR 20 level, which is 95% down its peak price reached during 2008. The company’s market capitalization value is INR 10,375 crores.On the surface, the company’s stock looks pretty bad fundamentally, with a negative book value. However, the stock performance has shown a rising trend in the last six months returning over 36% to shareholders. With fundamentals improving every quarter and the company management showing confidence in growth, Suzlon’s best days might lie ahead. The size of the opportunity is also enormous with India expected to install huge amounts of solar and wind energy capacity for the next 2-3 decades.

Indian wind market showed high growth last year and is expected to show a record-breaking year in FY 17 also. The country has a target for 100% rural electrification by 2022 and hence major renewable sources of power should benefit from this trend. Suzlon has a vision of becoming one of the largest renewable energy firms in the world. As wind energy market in India has matured with growth rates tapering off, Suzlon has smartly diversified into solar. The company has already stated that it will get out of debt restructuring in 2017, as it recaptures market share in the Indian market. The company has fought back and has shown a promising performance. The stock performance has also improved and is currently trading at low levels. I think it is a good time to add Suzlon to your renewable energy portfolio.