Solar Industries India Ltd. (NSE:SOLARINDS) is India's largest manufacturer of industrial explosives and explosives initiating systems. What started off as a single site manufacturing company in 1995 has turned into a globally recognized industrial explosives manufacturer today. Solar Industries has also expanded into the defense sector and has established one of the world’s most integrated facilities for ammunition. It operates in two sectors Industrial Explosives and Defense. Solar Industries has a wide geographical footprint, selling products in 51 countries globally. The company is expanding in various markets like South Africa, Zambia, Turkey, Nigeria, etc. Solar Industries is favorably placed to benefit from India’s increased focus on defense and sourcing ammunitions locally as well as growing international exports.

i) Expertise and rich experience in industrial explosives segment - With more than two decades of rich experience, Solar Industries has earned the loyalty of its customers for its quality and safe products. The company is trusted by a wide range of customers from different industries like mining, institutional, housing and infrastructure, exports and overseas markets, defense and others. Exports and overseas markets account for ~40% of the company’s total revenues. Solar Industries’ products are endorsed by leading national and international firms. Given its long-standing industry relationships, the company bags strategic long term deals from time to time. It won the running contract for the supply of bulk explosives to the subsidiaries of Coal India Ltd. worth more than Rs. 1,000 crores in 2017.

ii) Wide range of solutions - Solar Industries provides a complete range of solutions which includes packaged, bulk explosives and initiating systems to meet its customer needs across the globe. It operates through industrial explosives and defense sectors. The explosives sector accounts for roughly 50% of the company’s revenues. In the industrial explosives sector, Solar Industries provides packaged and bulk explosives, and initiating systems, while in the defense sector, it offers military explosives, bombs and warheads, initiating systems, and ammunition. Super 90 which is the company’s most popular product is a robust, high strength, detonator sensitive explosive. The company has eminent names such as the Government of India, Coal India, Singareni Collieries, Vedanta, Reliance, Jindal, etc. on its customer list.

iv) To benefit from India’s growth story - As a manufacturing leader of industrial and military explosives, Solar Industries is in a good position to benefit from India’s growth story. The company is anticipating sales volume growth to 4,50,000 MT from 3,00,000 MT by 2020 in India and defense revenues to reach Rs. 500 crores by 2020. The company has a strong order book standing at Rs. 1,306 crores including defense order book of Rs. 161 crores at the end of its first quarter, 2019 as can be seen under. The order book grants enough visibility for future growth. India's plan to manufacture ammunition domestically and increase coal production act as strong tailwinds for Solar Industries. It is also estimating overseas revenue to cross Rs. 1,050 crores.

Solar Industries has experienced revenue growth as a result of higher demand from the defense, mining and rising exports. The company, however, was unable to increase its margins at the same pace due to increasing input cost. Rising competition from the likes of Kama Holdings, Fine Organic Industries, Vinati Organics, etc. is another challenge for the company. Though the industry is happy about the Indian government preferring private companies to be its strategic partners for sourcing the country’s demand for ammunition, procedural delays associated with the administration could be a major dampener for Solar Industries. The company also faces competition in sourcing government contracts through the tendering process.

Solar Industries has shown stellar stock performance, growing by 2000% since inception. The company has a market capitalization value of Rs. 9,700 crores and is trading at 37 times its earnings. The valuation is high but is justified given the company's strong upside potential and index average PE of 29x (at the time of writing this article). Shares of Solar Industries are currently near Rs.1080 which is just 20% shy of its 52-week high price. 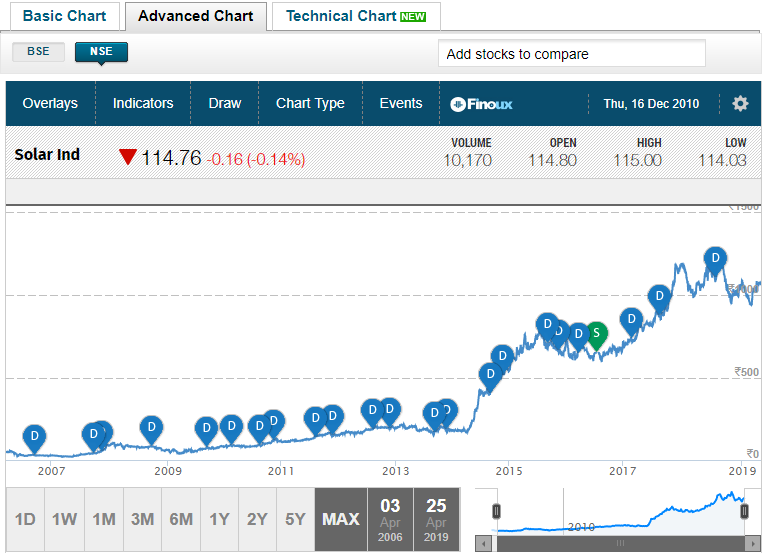 As the largest manufacturer and exporter of industrial explosives, Solar Industries enjoys 28% of market share in the domestic explosives market and 70% in the explosives export market. It is one of the leading suppliers of explosives to mining and defense industries in India and has built a wide moat around its business. The company enjoys high ROE, ROCE, and strong cash flows. Solar Industries is a shareholder-friendly company paying dividends for more than a decade and amounting to nearly Rs. 220 crores till date.

Solar Industries is experiencing growth in revenues from all its segments due to increased demand, higher revenues from Coal India, growing order book from the defense sector, and higher exports. Growing demand for construction of roads, buildings and infrastructure have also led to a higher demand for explosives. Increasing domestic coal production is a major tailwind for Solar Industries, as Coal India is its biggest customer. The company’s capex in the defense segment should also start to bear fruits in the near future. India’s plan to invest heavily on modernizing its armed forces also works in favor of the company. Solar Industries is thus, solid, high-quality stock with strong competitive advantages. It is a good way to play India’s increased spending on infrastructure, mining, and defense.