ICICI Bank (NSE:ICICIBANK) is the largest private sector bank in India by assets. The banking company’s third quarter 2017 results were not upto expectations due to demonetisation effects and a rising level of bad loans. NPAs were a dampener effect on the bank’s financials and the effect is going to be seen in for a few more quarters. However, the bank is improving its core operations by strengthening its retail portfolio and focusing on lending to select corporate houses. Also, going forward ICICI should benefit from the increased number of formal transactions poised to take place in India after the demonetization drive. The country is witnessing a major banking and payment transformation through increased penetration of digital payment systems such as UPI, Bharat QR and BHIM app. All of these changes will act as major tailwind for the formal banking system in which ICICI bank is a leader.

ICICI Bank has strong digital capabilities which should help the company keep up its lead in the digital banking age. Its iMobile app has improved the overall banking experience for its customers. It has also announced a number of other digital initiatives in recent times such as Express Home Loans and iLoans. The bank recently launched a mobile app called Eazypay for merchants to accept payments on mobile phones through multiple modes. ICICI bank is poised to benefit from digitization in a big way with the volume of mobile banking transactions growing by more than 50% quarter on quarter. Digital channels also accounted for 73% of savings account transactions during the nine months ending December 2016. The bank thus benefitted from the demonetization drive as it already had an effective technological infrastructure in place for its customers. ICICI bank also has a strong presence in rural and semi-urban areas with 52% of its total branches located in these areas. 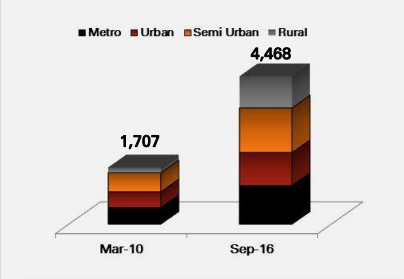 NPA level should decline as the industry and the overall economy starts recovering. Compared with other private sector banks like HDFC Bank  (NSE:HDFCBANK) and YES Bank (NSE:YESBANK), ICICI bank has higher level of NPAs. However, the situation should improve as the economy shows signs of recovery.

During the third quarter, total NPA additions reduced to INR 70.37 billion from INR 80.29 billion in the earlier quarter. The Bank’s net non-performing asset ratio stood at 3.96% as of December end compared to 3.21% as of September. NPA levels should decline in the future as the company is focusing more on retail lending and lending to higher rated corporates.

The bank continues to show sustained leadership in India’s life insurance industry with its subsidiary ICICI Prudential having an overall market share of 12.4% in H1’17. ICICI bank owns 54.9% in ICICI Prudential Life Insurance. It recently did an IPO which was oversubscribed by ten times. The insurance company has generated ROE of more than 30% consistently over the last four years.

ICICI Lombard General Insurance Company is another JV of ICICI Bank. It also maintains a leading position in the general insurance segment. In April last year, Fairfax Financial Holdings bought an additional 9% stake increasing its overall holding to 35% in ICICI Lombard reflecting the foreign partner’s confidence in the company.

ICICI Bank reported a decline in net profits by 19% as compared to the prior year. Net profit fell to INR 24.42 billion for quarter ending December from INR 30.18 billion reported a year earlier. This bettered analyst estimate of INR 21.7 billion. Net interest income fell by 1.64% to INR 53.63 billion, while non-interest income fell by 6.61% from a year ago to INR 39.38 billion. However, total deposits grew by 14.2% year-on-year to INR 4.65 trillion as of December. There was growth in all key segments – retail, corporate and SME by 17.8%, 4% and 6.6% respectively year-on-year. ICICI bank also maintained significantly higher capital ratios than regulatory norms.

NPAs continue to remain a big challenge for the company. Though conditions look like they should improve going forward, the bank still carries a huge burden on its balance sheet. Though credit provision as a percentage of interest income was high in FY17, it declined during the third quarter indicating that the worst is probably behind the company..  RBI has introduced the concept of bad bank in India, which will enable the creation of a standalone bank to takeover all the bad assets and thus clean the books of accounts of the former entity.

The stock is currently trading near INR 280 levels and has returned around 13% to its shareholders over the last year.  It has a dividend yield of 1.78%. The stock has a market capitalization value of INR 1.58 trillion and trades at a P/B of 1.87x. It is undervalued when compared to HDFC Bank’s (NSE:HDFCBANK) P/B of 4.9x and Yes Bank’s (NSE:YESBANK) 4.5x. ICICI Bank is leveraged to the growth of the general economy. With the Indian economy expected to stabilize and grow following the demonetization drive and reforms like the GST, the bank should deliver better returns to its investors.

According to The Economy Survey, India is expected to grow at 7% next year. Implementation of structural reforms like Goods & Services Tax in India and JAM will enable India to remain one of the fastest growing large economies in the world. According to the latest Grant Thornton International Business Report (IBR) survey, the country ranked first on optimism index during the December quarter.  ICICI bank was able to post ~18% growth in the retail segment y/y, despite MDR and ATM fees hike. Though financial numbers remain weak till now, the bank should soon return to a high growth path owing to its strong retail franchise, rapidly growing insurance subsidiaries and strong digital capabilities. As the largest private bank in India, ICICI Bank is a good way to invest in the long term secular growth of the Indian economy.